We Used To Go To Brunch: A new musical 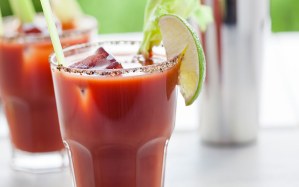 An exclusive sneak preview of the show critics can’t stop talking about!

“Maybe it’s time for you to think about going back to work.” –My Husband

“I’m here if you need to talk.” –My Best Friend

“Sondheim couldn’t have done it better himself.” –Me

(THE MOTHER and THE FATHER sleep curled together beneath a comforter. The dog sleeps at their feet, and the baby sleeps in a bassinet at the foot of the bed. The scene is softly illuminated by a diffuse, pre-dawn light. The idyll is shattered when the baby begins to wail, the dog starts whining for her breakfast, and THE TODDLER calls to the parents from off-stage.)

THE TODDLER: Mommy! I have poop!

(The Mother groans. The Father pulls the covers over his head and starts snoring ostentatiously.)

THE MOTHER: Don’t even.

THE FATHER: What time is it?

THE MOTHER: It will only make you sad if I tell you.

(The Mother picks up the baby and begins to rock him. Her hair is matted and greasy, and when she turns around we see that the back of her nightgown is tucked into her underwear. The Toddler calls out again.)

(The Father has gone completely still under the covers in hopes of becoming invisible.)

THE MOTHER: Can you get this one? He is three years old and he needs to start using the potty. It’s like changing a man’s poop. I just can’t right now.

(The Father kicks off the covers and shuffles out of the room. He walks into The Toddler’s room just as the boy pulls off his diaper and spills its contents onto the floor. The Father gazes wistfully into the distance and sings.)