Look, We Made a Cake! (Progressively Honest Instagram Posts) 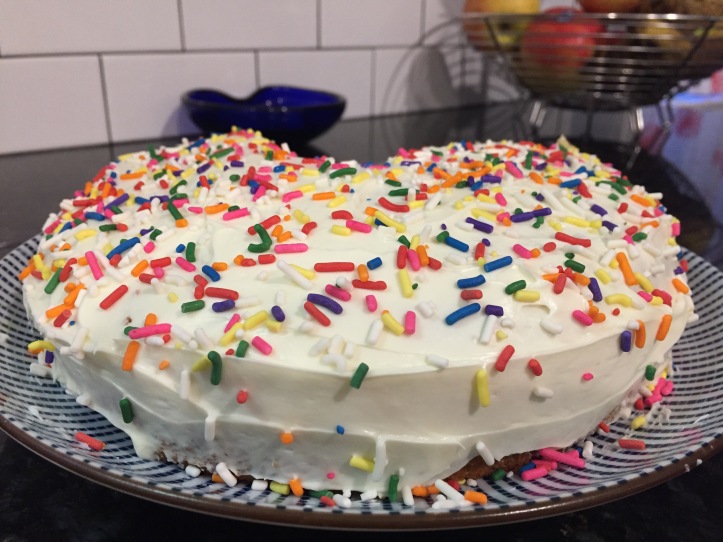 The kids and I baked a cake!

They added and mixed the ingredients all by themselves! It was messy, but I totally didn’t feel anxious about it or worry about how much more work I was creating for myself by engaging in this endeavor. Theo even greased the pan!

It was a box mix, but those are actually sooo tasty. We always made box-mix cakes when I was a kid, so this is kind of like sharing a slice (ha!) of my childhood with my kids.

I had initially promised to make cupcakes, but then I remembered that the oven isn’t working (note to self: get oven fixed). After a moment of panic, I found a cake pan that fits in the toaster oven. Crisis averted!

Sometimes I worry that I have early-onset dementia.

Theo’s interest in the cake diminished considerably when I told him that it would be round with vanilla frosting and not shaped like Iron Man.

I bought the cake mix because I am running out of “fun” ways to fill the time between camp and dinner.

I feel like the kids should be playing outside, in the lovely backyard we left the city to give them, but they won’t go out without me. And I don’t want to go outside. The swing set gets full sun in the late afternoon, and it’s SO HOT.

I feel bad for not being more outdoorsy.

I let the kids taste the cake batter. Please don’t report me.

I overfilled the cake pan, and it took much longer to bake than I anticipated. So instead of having the cake right after dinner, the kids had to eat it after their bath. This was a terrible idea on many levels, but we started this thing, and by god we were going to finish it.

When the cake was finally ready, the bottom stuck to the pan and it all plopped out in a broken heap. Theo declared it “the worst cake ever” and burst into tears.

Maybe next time he’ll do a better job of greasing the pan.

My husband got home just in time to save the day! While he helped the kids get into their pajamas, I scraped the bottom of the cake out of the pan and glued it all back together with frosting. I covered the whole mess with the remaining frosting and dumped a bunch of rainbow sprinkles on it.

It was past bedtime when the kids finally had their cake. Theo ate the frosting off of two pieces, and Nicholas smeared his all over his face and pajamas. Incredibly, they both went to bed easily, despite the sugar coursing through their bloodstreams. Making a cake is exhausting!

After everyone was asleep, I ate a huge piece of cake on the couch while watching HGTV and scrolling through Instagram photos of people who are having amazing summers.

I hope that when my kids look back at their childhoods, they’ll think, “Wow—Mom was so great. She would make cakes with us in the middle of the week just for fun.” Either that or they will develop diabetes.

Tomorrow we will definitely do something outdoors.