This little gem popped up in my newsfeed last week: 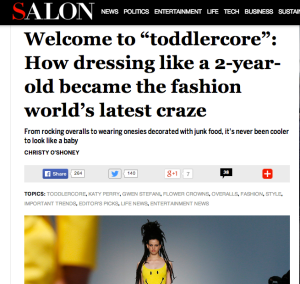 Think about it: Toddlers have it all figured out. On any given day, a toddler can be found doing inspiring things like commanding attention in public places, eating vegetables out of pouches, and wearing tutus to formal events. A toddler dresses for the job she wants (doctor, superhero, princess, sea witch), not the job she has (toddler). She romps in rompers. She jumps in jumpers. She sports jelly shoes with socks, and she doesn’t care if you like it.

It may indeed be marvelous to be a toddler, but that does not mean you should dress like one—especially if you are older than, say, 5. (I’m talking to you, first-graders. No one in elementary school will take you seriously if everything you own has Dora the Explorer on it. Dora has grown up and so should you.)

Also, toddlers need to get over themselves. If there’s one thing those little attention mongers don’t need, it’s more press. Once again, moms have gotten the shaft. Because we are clearly the ones who have had the biggest influence on today’s fashion trends, not that anyone has called to thank us for it.

And so, on behalf of overlooked moms everywhere, I bring you “mommycore.”

From messy, food-encrusted ponytails to sweatpants for all occasions, it’s never been cooler to look like a mom. Here are some of our favorite trends:

Morning-after mascara:
Smudgy, clumpy eyelashes are all the rage this season (or so I read in New York Magazine while attempting to tune out my son’s demand to watch Cars for the forty-seventh time). The Fashion Industrial Complex would have you believe that this trend is inspired by raccoon-eyed youngsters spotted during early-morning walks of shame in hip urban neighborhoods, but here’s how the look really came about: One day a mom found herself with a whole two minutes to spare and, like an archaeologist discovering an ancient urn, she unearthed a long-buried mascara from the bottom of her makeup bag and went to town. It was two more days before she finally found time to remove it.

Bedhead:
Seriously, fashion people—get your minds out of the gutter. People think this look is meant to evoke a tousled, post-coital Brigitte Bardot. Wrong. Morning drop-off at daycare is a veritable catwalk of bed-headed babes who couldn’t even tell you the last time they had sex.

Sweatpants:
Another triumph for mommycore. Based on their inclusion in the J. Crew fall preview catalog, I think it’s safe to say that sweatpants have officially been sanctioned by mainstream fashion as legitimate, wear-in-public-without-shame attire. (Note: in order for the sweatpants to qualify as “fashionable,” I believe they have to be clean, and they cannot be made by Hanes or have the name of your college or university anywhere on them.)

Hair, hair, everywhere:
With Madonna Instagramming photos of her furry armpits and Cameron Diaz exhorting women to let their pubic hair run wild, hirsute moms who no longer have time to groom are totally on trend. Bushy eyebrows? Still going strong. The mainstream has yet to embrace the lady ‘stache, but can it be long before we see Miley Cyrus rocking a “Frida”?

Pre-stained clothing:
Artfully ripped and distressed jeans have been cool forever. Now, the pre-stained shirt is having its moment at last. Among today’s hottest sellers are tops adorned with strategically placed dark patches that mimic leaked breast milk. And this season, no shoulder or lapel should be without at least one dried spit-up stain. If you’re feeling very adventurous, pair this look with a hairstyle that features matted strands stuck together with a substance you’re pretty sure is food (possibly something from a squeeze pouch).

Sleep-deprivation chic
Kind of like the controversial “heroin chic” trend of the mid-nineties, sleep-deprivation chic has captured the imagination of fashionistas even as it draws the ire of medical professionals, educators, and other boring members of society. Featuring a combination of all or some of the looks mentioned above, sleep-deprivation chic is also virtually identical in appearance to heroin chic (minus the thinness, obviously) and is appealing only to those who are still young enough to look impossibly fresh no matter how little sleep they get.