Learning To Be Messy

My husband and I recently went to Belgium for six days without the children. There were lots of great things about the trip: We got to explore Brussels, a city neither of us had visited before; we attended a dear friend’s wedding; we ate good food and spent time together like real adult humans. But the best part of the whole thing was the apartment we stayed in. It wasn’t particularly large or fancy, but it was PERFECTLY ORGANIZED.

People who have been to my house will say that it is pretty neat, and this is true. But having a couple of little kids around means that one can only be so neat (without making yourself and everyone around you miserable, at least).

So yes, my house is neat, but the Brussels apartment was Marie Kondo’s wet dream. All of the surfaces were free of clutter, and the decor was sparse and thoughtfully arranged. Kitchen and office supplies were tucked away in a clever system of drawers and sliding doors—but even the insides of the drawers and cabinets were lovely. Each kitchen utensil was nestled into its own groove, and the tea towels were perfectly folded. One of the few things that sat on the counter in plain view was a little glass bowl filled with sugar cubes, a pair of tiny silver tongs resting on top. Looking at it made me happy.

To be fair, the Brussels apartment is not regularly inhabited; the owners keep it primarily for rental on Airbnb. Still, returning to my house, which is regularly inhabited—by four people and one dog—was an adjustment. I was forced to confront my, shall we say, obsessive tendencies anew. There are pros and cons. For instance, I know where everything is at all times. Where’s the Baymax action figure? Why, it’s in the super hero bin, of course. On the flip side, I can get a little obnoxious. Like when I decided that the compass my husband had randomly left on the laundry room shelf needed to be removed immediately, and then freaked out when the compass later showed up on the couch in the den, which is CLEARLY NOT WHERE IT’S SUPPOSED TO BE.

Sorry, where was I? Oh yeah: I have a problem. And I’m working on it. But it runs pretty deep—like, back to my childhood. When I was a little kid, one of my favorite books was The Berenstain Bears and the Messy Room. I hated the messy parts, but it was so satisfying to see Brother and Sister Bear’s room all neat and tidy at the end. I mean, look at these beautifully labeled boxes, and the step stool hanging on the inside of door:

And the pegboard! And all of the dinosaurs together on one shelf! 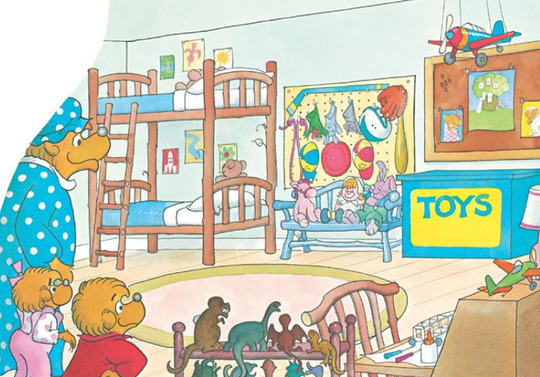 Man, I’m going to have to get this book for my kids.

But in the meantime, I am trying to let go, a little bit at a time. I will continue to pack up boxes full of stuff that we no longer need, and wave giddily as the donation truck carts them away. And I probably will still organize the kids’ toys by theme. (Because really! It just makes more sense that way!) But I am trying not to let the whole thing occupy so much space in my mind—not to mention my time. Things like writing, making dinner, and, most importantly, spending time with my family, have to come first. And at the end of the day I’m usually too tired to pick up toys and organize stuff, and too tired to care. And in this one instance, exhaustion is actually a positive thing.

Maybe someday I’ll have a perfectly neat and organized house, but I’m sure I will be missing my kids, who will at that point be long gone. And that is a sad thought—so much sadder than the fact that someone has stuck pieces of Scotch tape all over the dining room walls, and laundry is piling up downstairs, and the Lego situation has gotten totally out of hand. Now if you’ll excuse me, I have to go make dinner and pick up the kids.